With March under my belt, I feel like it’s time to really start mixing things up with these designs. I’ve tried some new things this month, some of them very successful, some of them, IMHO, not so successful.

April is when I hope to really start to ramp up some promotion, and start to think about where this whole thing is headed.

February was the month to put out the requests I’ve been getting. In fact, 14 of 22 posters in February were requests, and I hope to continue the year with more requests than selections each month.

March is shaping up to be an interesting month, especially since I’m racing to keep up.

I’m very proud to have completed this first month of the one years challenge. Each weekday of each month I will be producing a new poster based on a song; which means this January I produced 21 original posters.

I’m not an especially disciplined person, and, truth be told, I’ve tried schemes like this before. But this year something has changed and I’ve learned what keeps me actively engaged in a project as well as how to plan for success.

I hope you enjoy the designs. Hopefully I will have some prints available soon.

It’s my birthday this week, so I’m gonna be releasing some designs based on some of my favorite songs.

My sister asked me to blog about why I asked for vinyl records this Christmas; so I’m following through on that.

I’m self aware enough to know I’m falling into the cliché of the vinyl collecting hipster, but I just don’t see a way around it. Let me provide you some context…

I made the transition from cassettes to CDs in high school, and I never really wanted to transition out of CDs, but here I am. The combination of music syncing across devices, the deterioration of the audio systems in the cars I own (from a newer Jetta to an older CRV and even older Corolla) has brought me to the point where the most powerful speakers I own are in my Macbook Pro. If I really want to listen to music, I often resort to earbuds plugged into my iPhone.

As I’ve gone to shows recently, I keep coming across cheap vinyl at merch booths with the album download included. I’ve picked up albums by Perfect Pussy, Hot Nerds, and Cloud Rat that way. I even waited to buy the new Lightning Bolt album until I could buy it directly from them at the show. I like the large artwork, the physical media in my hands, yada yada, blah blah. I’ve vowed to get my turntable up and running again.

I’m a designer, who plays in a metal band, that has a small family with more important things to worry about and buy than a hi-fi system.

I’ve known from the beginning that my MP3s weren’t hot shit, but a friend came over one night and proved it to me. 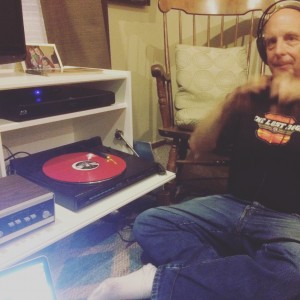 Steve is a semi-retired AV tech who has doubtless taken greater care with my audio needs than I have. On this particular evening, he stopped by with a phono pre-amp, amplifier and two pair of identical headphones. The idea was to listen to the same songs on MP3 and vinyl and see what kind of difference we could hear. After subjecting him to double doses of Cloud Rat and Hot Nerds, he tortured me with the Eagles’ Take it Easy a couple of times. We came out the other side with a couple of findings.

First, I was surprised at the noticeable difference in depth and quality of the music coming from the turntable as opposed to my laptop. I don’t consider myself to have an ear for quality tone, but even I could hear a difference that was compelling.

Second, Steve was surprised that the recent vinyl pressings of current grindcore and obscure indie rock was mastered specifically for vinyl. His guess was that modern music was so compressed that it wouldn’t take advantage of the dynamics of the vinyl medium. But even under that assumption, an album like Sensitizer by Warsawwasraw had noticeably better dynamics and clarity than the MP3s.

I would argue that, in addition to the difference in quality between the vinyl and MP3, tech companies currently build their hardware to the low bar that MP3s have set for us. Perhaps next time we should listen to various media piped through my Macbook Pro into Apple earbuds. I suspect it would all sound the same.

So while I was surprised at the wider tonal range of vinyl, it was relief to actually be listening to music again. So now, it’s time to start really listening to records again. Just a little bit here and there, but I want to become very engrossed in the music again, like when I was a kid with a Sony Walkman on long car rides. I think the artists producing great work are worth it.